Tommy Lee’s new single, ‘Captain Sparta’ has been a change for the norm for the deejay, who has recorded songs such as ‘Uncle Demon,’ and ‘Psycho.’

Polarizing Dancehall artist, Tommy Lee Sparta is seemingly adopting a new caricature of himself within industry circles as he has eased up on the demon talk and focused his attention to reaching young people through his music.

Last weekend, the ‘Gaza’ deejay released the video for his single, Captain Sparta which features various characters from children’s television shows such as Dora the Explorerand Jimmy Neutron. Though fans and critics of the entertainer were caught off guard by his sudden change of tune, Tommy Lee was lauded for stepping out of his Uncle Demon persona to do a single for the younger demographic.

He now looks to take that one step further as he prepares to kick start his five-week tour of Europe this week. Included in that tour is a show at the Sherholmens Youth Centre in Sweden on April 24, which will be entirely dedicated to children in the Scandinavian country.

The deejay also promises to drop a part two of his Captain Sparta single in the near future.

Speaking with IRIE FM on Tuesday, Tommy Lee challenged other deejays to make more songs for young people as he is committed to releasing child-friendly material on a regular basis.

“Every three month or so, mi a put out a tune fi di kids dem, cah nobody nah pay dem no mind,” he said. “A pure bruk out tune everybody a sing and gun tune and hype fi buss. Di pickny dem a born fans a Dancehall so I guess a me alone a bruk out di pickny dem.”

Tommy Lee’s upcoming tour includes performances in Holland on April 12 and 13, Paris on April 19, Rome on April 30 and Dortmund, Germany on May 10.

Excommunication is a religious censure used to deprive, suspend, or limit membership in a religious community or to restrict certain rights within it. Some groups use the term disfellowship instead.

Snoop Lion excommunicated from the Rastafari Community, according to Bunny Wailer!

Bunny has always had his doubts about Snoop Lion‘s intent and now his skepticism has taken an even stronger stance, that of excommunication. The news was broken via his Facebook profile and via press release.

Recently Snoop Lion has struggled to convince the Rastafari and Reggae community that he is sincere about his profession of, and transition to the faith, principles and beliefs of Rastafari. Most doubtful is Bunny Wailer the only living member of the original Wailer.

‘Excommunication is a religious censure used to deprive, suspend, or limit membership in a religious community or to restrict certain rights within it. Some groups use the term disfellowship instead,‘ stated Bunny’s official release. With that said, this would surely deprive Snoop Lion from direct contact to some elders within the Rastafarian community also, access to vital information and place of worship.

Let us see how Snoop Lion will handle this stern ‘no-confidence’ vote on his musical and spiritual intent.

Premiered in January of last year, Make It Bun Dem has scored over 317,000 downloads, including nearly 7,000 downloadthis week alone. The song has spent 21 weeks at the top of the chart and has also made an impact on charts worldwide, placing as high as 15th in Belgium, 16th in New Zealand and 16th on the UK dance chart.

It has also become a hit with Jamaicans, topping a number of charts, particularly TVJ’sEntertainment Report chart for several weeks.

Originally released as an instrumental in 2011, Make It Bun Dem was then re-recorded with vocals from Damian Marley‘s chart-topping smash, Welcome To Jamrock.However, Marley offered to do new, original lyrics for the song and by May of last year, the current version of the song was released.

The official video for Make It Bun Dem was subsequently unveiled in September and has garnered over 40 million views on YouTubealone.

Marley currently has four songs on Billboard’s Digital Reggae charts, including the aforementioned Welcome To Jamrock, Patience and Road To Zion, with the latter two songs featuring long-time collaborator and hip-hop superstar, Nas.

Skrillex, a California native, has been active in the music scene since his days as the lead singer of

From First To Last. The 25-year-old musician released two albums with the band before leaving in 2007 to pursue a solo career. He has also released tracks such asBangarang (feat. Ellie Goulding) and Breakn’ A Sweat (feat. The Doors). 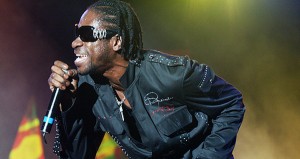 Bounty Killer has left the streets talking with his most recent performance at Usain Bolt’s Tracks and Records in Kingston on Tuesday.

Typically when watching a Bounty Killerperformance, you can expect lots of energy, ferocity and a few rants here and there and patrons at Usain Bolt’s Tracks and Records got just that at Tuesday night’sBehind The Screen series in Kingston.

The self-professed ‘War Lord’ was in a militant mood at Constant Spring’s Marketplace,taking aim at homosexuals, politicians and even the sound engineers. After being introduced to the stage by fellow Dancehall legend, Shaggy and Trinidadian soca star,Machel Montano, Bounty wasted no time in re-acquainting fans with his classics such asSufferer, Cellular Phone and Rivers of Babylon.

But just as his set was getting warmed up, technical difficulties cooled the performance momentum as his microphone and monitors on stage weren’t working properly. Though Bounty continued to perform, the technical glitches persisted and the Alliance leader walked off in a rage.

After cries from his eager fans, Bounty returned, performing more hits such asBulletproof Skin, Can’t Believe Mi Eyesand Eagle and Hawk as he lashed out against homosexuals, child molesters and politicians. But when his microphone went dead mere moments after delving into this part of his storied catalogue, Bounty letBehind The Screen organizers have it.

“Mi love Usain Bolt but a di last time mi a perform ya so. Mi come in here come see people perform problem free. Now a my time and look wat a happen. Uno don’t know say uno must not aggravate a cross and angry man,” he said during an expletive-laden tirade.

However, Bounty apologized to organizers and patrons for his outburst and began singing for the female portion of his audience, with songs like Say You Leaving and It’s OK.

He was later accompanied by Dancehall/Reggae star, I-Octane as they performed their hit collaboration,Badmind Dem A Pree before exiting the stage.

Having had performers such as Konshens, Sizzla andRomain Virgo electrify the Behind The Screen stage before, this was arguably one of the most entertaining and controversial nights in the popular series as Bounty once again showed why he is one of Jamaican music’s top performers.

Bounty Killer Performs at Behind The Screen (April 2, 2013)