Reggae singer, Jah 9 has announced the impending release of her sophomore album, Rebellion this summer as she looks to build on the buzz she garnered with her strong debut effort, New Name last year, reports Tuesday say.

It was with that first album’s lead single, New Name that made the Rastafarian songstress a household name within Reggae music in 2012, one of the main faces among a plethora of new stars to enter the genre’s framework that year. Now, she hopes to recreate that magic with Rebellion, which will feature more of jazz-on-dub style music that made her first album stand out while also showcasing songs filled with socially conscious lyrics.

“Many people don’t really have exposure to the words of His Majesty, so it’s important to present his words. I put them in context they (the people) can understand, she told the Jamaica Gleaner in a report published Tuesday.

Despite this album being the second to come out from Jah9, she insists she had been working on this project as far back as 2007, but decided not to release it as she wanted to learn more about herself as a person.

In the meantime, Jah9 is promoting her recently-released mixtape, For the Love of Kush, a project she is using as a way to advocate for the legalization of marijuana amidst the government’s consideration to decriminalize the herb. She hopes the mixtape will help spread knowledge about the nutritional benefits of the drug, admitting her cause is personal after losing a brother to leukemia when she was nine years old.

“There are many people, in Jamaica in particular, who suffer from a set of diseases that plague people on this side of the world. Herb is medicine and we should capitalize on its use,” she said.

“We’ll see how legislation and discussion in Jamaica can progress a little more quickly now, but the reality is that there is still oppression on marijuana here.”

Internationally acclaimed Reggae singer, Barrington Levy points to a lack of guidance as the reason for increases ‘shock value’ methods employed by young Dancehall artists in their musical content.

Throughout 2014, music lovers have seen a sharp increase in hardcore sexual content and imagery within Dancehall, with the likes of Alkaline, Demarco, Ricky Carty and J Amsterdam pushing boundaries with eyebrow-raising material to gauge interest from fans. One legendary artist is sick of this growing trend.

Barrington Levy, singer of classics such as Broader Than Broadway, Under Mi Sensi and countless others says he is tired of the X-rated nature that the genre has taken on and thinks it has damaged its credibility.

In an interview published in the Jamaica Observer on Tuesday, Levy said, “I see where the music business is taking a turn for the worst. It’s going in a direction where we are losing it.”

“These people have no morals anymore. Are we going to do anything for money? I never came into the music business just to sell records. I thought I would just sing for the love of it.”

In another interview with the Jamaica Gleaner, Levy was more solutions-oriented, pointing to a lack of positive influence as the reason why young artists choose to ratchet up the shock value in their musical content.

“They are surrounded by a lot of hotheads that cannot steer them in the right direction,” he said. “People are talking about them and their songs, but not in a good way. As entertainers, we need to always set a good example for the future of music.”

“Surround yourself with good people, people who will lead you in the right direction, people that will help you make good career choices that will ensure longevity and international success.”

Dancehall has long contained specks of raunchiness and hardcore sexual content throughout its near four decades of existence, with artists such as Lady Saw and Vybz Kartel bringing said content to the forefront and becoming all-time greats as a result.

Meanwhile, Levy is set to release a new acoustic album with variations of his biggest hits. He is currently promoting his new hit single, Rosie. 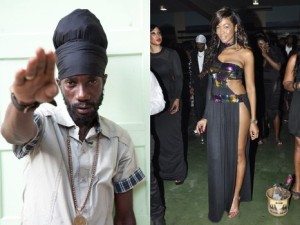 Reggae/Dancehall singers, Sizzla Kalonji and D’Angel have been banned from future editions of STING following alleged controversies during their performances at STING 2013

Days after giving what some said was the best performance of STING 2013, Reggae singer, Sizzla Kalonji has been banned from future editions of the show by its lead promoter, Isaiah Laing, for alleged hate lyrics performed during his set, according to reports Tuesday evening.

The Grammy-nominated artist gave a rousing, hard-hitting set during the 30th anniversary show, in which he spoke out strongly against homosexuality, negative connotations attached to marijuana, among other societal issues. According to Laing, Sizzla’s ban comes as result of continuous rants against homosexuals throughout his performance, which went against a pre-show agreement with organizers not to sing anti-gay lyrics during his set.

“Sizzla was warned repeatedly before going onstage about not promoting hate music and he went up there and did it repeatedly,” the Supreme Promotions CEO told the Jamaica Gleaner. “We are going international and we warned every artiste before they went on to the stage.”

Meanwhile, D’Angel is also in hot water with Laing after giving a controversial set of her own at STING.The popular deejay was banned for at least five years as a patron following a clash with Ninja Man for what Laing called an ‘embarrassing’ stint. During the impromptu set, D’Angel surprised the crowd when during her performance, she spread her legs multiple times while only wearing a short dress. She also made several references to needing to pay for her son’s school fee as she was not initially booked to do the show.

Both bans were reportedly confirmed on Saturday following a meeting.

“What kind of image is D’Angel portraying as a mother? he told The Gleaner. “She’s saying she came to clash but that’s not how the clash went. It was not about Ninja Man, she embarrassed herself. At least a five-year ban for D’Angel.”

A press release, issued by STING 30 promoters on Tuesday illustrated the organizers’ frustration with some of the acts during their performances, saying they were, “inconsistent with their efforts to provide energetic and authentic Jamaican entertainment.”

“We believe that our artistes will take note of the observations which will assist us in effecting the kinds of control that we have been working assiduously to maintain and introduce,” the statement continued.“We wish to commend the majority of artistes who appeared on the show and performed in accordance with the standards which are reflective of our objectives.”

“Sharp lyrical exchanges and colorful performances are staples of our annual offering, however, in accordance with our efforts to internationalize the event, we strive to ensure that the performances conform to accepted standards of decency and decorum.”

STING 30 was broadcast to overseas viewers, via pay-per-view and a live stream worth just under $US40 each. 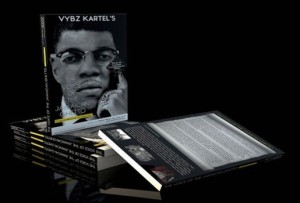 Despite an apparent hesitance by some Jamaican bookstores and universities to facilitate it, Vybz Kartel’s debut book, Voice of the Jamaican Ghetto has now received strong endorsements from prestigious American universities, according to co-author, Michael Dawson.

According to reports this past weekend, Prominent Ivy League school, Princeton University as well as Duke University in North Carolina and Vanderbilt University in Tennessee now have Voice of The Jamaican Ghetto  in their respective libraries. This adds to attention Kartel’s book has received from major international media outlets such as HOT 97FM as well as sales in places such a Germany, Chile, Austria, Holland and many other countries.

While Dawson is pleased with the universal exposure Voice of the Jamaican Ghetto has received, he believes the book still has not received full appreciation from the Jamaican public.

“All major book stores – Sangster’s, Kingston Book Shop, LMH, both airports, I-Nation, Bookophilia and Bookland – have carried the book,” Dawson told the Jamaica Gleaner. “Uptown stores and religious book stores refused it out of ignorance, I believe, and we expected that,”

There has been much debate as to whether or not Jamaican schools will adopt Voice of the Jamaican Ghetto in their curriculum, with University of the West Indies (UWI) professor, Carolyn Cooper calling for the book to be introduced to Caribbean Examination Council (CXC) readings this past May.

Dawson believes the reason for the education system’s reluctance to circulate the book within its channels comes down its challenging of the historical data taught throughout schools for years.

“I think the main problem with the Jamaican education system is that they would have to find a way to rationalize the inaccuracies, distortions and omissions in the traditional history books that our book highlights,” Dawson told the Jamaica STAR. “The reality is that the book factually discredits some of our traditions – from Jonkonoo to the dominance of Euro-Christianity.”

He continued, “How will the education system handle a book that explains with facts and empirical data that much of what they have taught children is a lie? The book states that ‘Baa, Baa, Black Sheep’ is abusive to black children. So I think the book is, at a minimum, disruptive to the traditional education system. Add to that the fact that Vybz Kartel has the ear of the youth, I’m not sure if the education system can come to terms with that. No surprise there.”

Vybz Kartel remains incarcerated in a Spanish Town jail as he awaits the beginning of the Clive ‘Lizard’ Williams murder trial in November. He, along with five other men are charged with the August 2011 murder of Williams. Additionally, Kartel and two other co-accused face conspiracy charges in connection with the case.