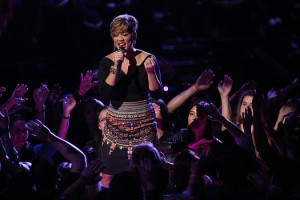 Jamaicans are breathing a collective sigh of relief as multitalented songstress, Tessanne Chin has advanced to the final 12 of BC’s hit talent show, The Voice.

The Kingston-born singer was one of two from her team headed by coach Adam Levine voted past the first phase of the live performance round, joining American singer, James Wolpert. Both Chin and Wolpert were spared of the agony of being amongst the three singers left to face Levine, as he was left with the choice of choosing between Preston Pohl, Will Champlin and Grey.

Ultimately, it was Champlin who received the vote of confidence from Levine to move on.

Prior to the voting, Tessanne and her teammates performed a rendition of the Capital Cities song, Safe and Sound to rousing approval.

Tessanne earned her votes following a moving, high octave performance of Many Rivers To Cross, the classic single by her mentor, Jimmy Cliff. She was considered by many analysts to be the headline performer of the night during her set Monday. Additionally, her rendition of Cliff’s song charted as high as 27th on the iTunes charts prior to the end of voting Tuesday morning.

The Top 12 will perform on Nov. 11 and Nov. 12 respectively as they compete for eight spots in the next phase of the live performance phase.