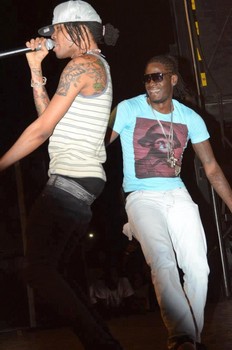 A pair of Dancehall stalwarts will be shifting from their hardcore personas in the name of peace, as they will headline a special concert aimed at curbing violence.

The publicist for Tommy Lee Sparta, Keona Williams told the Jamaica STAR that her client has a very positive image that people underrate.

“Tommy Lee Sparta is not just about the hardcore element, he wants to portray a positive image and be a good role model for the youths. We are hoping his fans will come out and be in full support of the message at the event,” Williams said.

“Tommy Lee’s music is just for entertainment, but as a person he advocates for peace, he is an ambassador for peace and that is the message he wants to promote. Patrons can expect an exciting performance and some new tracks.”

Williams, who also hails as Aidonia’s publicist also insists that the Stop The Violence, Stop The Crime concert will be a proving ground for the Run Road singer to show his other personality.

“Aidonia and Sheldon Lawrence are two different persons, he has a positive side and hardcore side. You can’t just give fans one side of music so we bring it in different contexts, and this peace concert will show a different side of him. He has uplifting songs and he is a very violence free person. In this time in our country, we need to join together for good and this is one of the main reasons we do this,” she said.

Aidonia recently returned to the island after performing at the World of Reggae show in Barbados while Tommy Lee Sparta was in Canada this past weekend performing a pair of promotional shows.