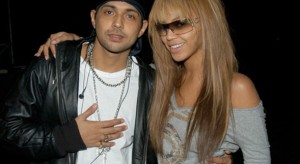 Sean Paul and Beyonce score big in 2003 with their chart-topping collaboration, 'Baby Boy' which helped launch the careers or both artistes

Though musical genres such as hip-hop, rock and roll as well as R&B may cop more accolades and mention on the international scene, it’s an undeniable fact that Dancehall/Reggae has left an indelible mark on pop culture worldwide.

Ever since Bob Marley was in his hay day, Jamaican music has impacted and inspired fans, observers and artistes of various backgrounds, with many of today’s most prominent acts such as Rihanna, Beyoncé, Bruno Mars and several others employing Dancehall/Reggae sounds in their music. Furthermore, many internationally acclaimed artistes and bands have done successful collaborations with Jamaican artistes, most recently with breakthrough Dancehall artiste, Popcaan and Jamaican born hip-hop star, Busta Rhymes on the Only Man She Want remix.

That joint effort has garnered Popcaan positive international recognition after dominating the local industry in 2011. With that in mind, here’s a look a ten memorable collaborations involving Jamaican artistes that helped shape the careers of many prominent Dancehall/Reggae acts.

10: Shabba Ranks feat. KRS-One – The Jam: In the late 80s, Dancehall was a slowly developing genre which was gaining steam locally and in the Caribbean thanks to artistes like Yellowman and Shabba Ranks. However, it was Shabba who would introduce Dancehall to an international fan base as he teamed up with foundation hip-hop artiste, KRS-One for the mixed genre single, The Jam. Featuring a mixture of Dancehall and hip-hop sounds, The Jamintroduced the world to Shabba Ranks as a hardcore, sharp-thinking lyricist who could mesh with artistes of different sounds. The collaboration later garnered Shabba his first international recording contract as he signed with Epic Records in 1991. From there, Shabba Ranks never looked back as he scored a pair of Grammy Awards for Best Reggae Album over the next two years and even became a fixture on American Television with famous comedian,Marlon Wayans doing a memorable skit of him on In Living Color.

9: Patra feat. Yo-Yo – Romantic Call: As Shabba Ranks was to setting the bar for male Dancehall artistes overseas, so was Patra to females in the industry. In the late 80s and early 90s, Patra amazed local audiences with her raunchy, no holds barred musical persona; garnering her mass attention and accolades for her work. Ironically, it was Shabba Ranks who gave Patra her first big break international as she collaborated withhim for the single, Family Affair in 1994 which cracked the top 100 of the U.S. Billboard singles charts.

However, it was 1995 when Patra elevated herself to elite status when she collaborated with female hip-hop starlet, Yo-Yo who was a protégé of former NWA rap superstar, Ice Cube.  Their collaborative effort, Romantic Call earned her a top 60 place on the U.S. Hot 100 Billboard chart and exposed her as one of Jamaica’s must-see acts. A cameo was even made by the late great Tupac Shakur for the accompanying video.

8: Stephen Marley and Mos Def – Hey Baby: How did Stephen Marley become the most accomplished Marley disciple internationally, in terms of awards? Perhaps it dates back to his memorable 2006 collaboration with veteran hip-hop superstar, Mos Def for the remix of his single, Hey Baby.

The lead single off Marley’s album, Mind Control, Hey Baby immediately became a sensation locally and overseas and, in part, propelled the album to top the Billboard Reggae charts once it was released in March 2007. A pleasant mixture of Reggae and hip-hop sounds, many still regard Hey Baby as Marley’s most insightful track to date as he speaks of love using unique concepts. Mind Control later won the Grammy Award for Best Reggae Album and he’s since won two more, including for Revelation Part 1: The Root of Life which featured a sultry collaboration with Canadian R&B sensation Melanie Fiona (No Cigarette Smoking).

7: Baby Cham and Alicia Keys – Already regarded as one of Bounty Killer’s most successful disciples, Cham was hungry to take his success to a higher leveland after his chart-topping smash, Ghetto Story became an anthem for inner-city communities across the island, he enlisted the services of Grammy-winning R&B singer, Alicia Keys for a thought-provoking remix of the highly-acclaimed single. Ghetto Story: Chapter 2 reached the top 100 of the U.S Billboard charts and solidified his place as a prolific Dancehall star on an international level.

6: Supercat and Heavy D – Dem No Worry We: Having collaborated with Kris Kross and P Diddy in the early 90s, Supercat showed the world that he was truly the Don Dada of Dancehall. However, 1992 saw arguably his best international collaboration as he teamed with Jamaican-American hip-hop superstar, Heavy D for the single, Dem No Worry We. Given their backgrounds, this mixture seemed destined from success from the jump and elevated the auras of both prominent artistes as they continued to stamp their authorities on their respective genres throughout the early 90s.

5: Damian Marley and Nas: Honestly, it’s hard to pick just one song these two have done as it seems that anytime Damian Marley and Nas join forces, a smash hit is born. Dating back to their 2005 collaboration, Road to Zion, ‘Junior Gong’ and ‘God’s Son’ showed a remarkable chemistry few artistes can replicate. The single reached number 57 on the Billboard R&B/Hip-Hop charts and prompted both artistes to work on a joint album, Distant Relativeswhich was released in 2010. Their album debuted at number five on the US Billboard 200 charts, featuring hit singles like Patience and Land of Promise, a remake of Dennis Brown’s classic, Promised Land.

After a highly successful world tour, many fans continue to hope that Damian Marley and Nas a similar project going forward and considering their success to date when joining forces, why not?

4: Bounty Killer and The Fugees – Hip-Hopera: The 1990s were long dominated by the intense rivalry between Dancehall giants, Bounty Killer and Beenie Man. However, while they continued their battle for supremacy, it was the ‘War Lord’ who scored first when it came to international collaborations as he joined forces with The Fugees for the uniquely conceptualized single, Hip-Hopera in 1997. Draped in royal attire, Bounty Killer displayed his lyrical dexterity for the world to see alongside Lauryn Hill, Wyclef Jean and Pras and copped at Billboard Hot 100 spot in the process.

This collaboration helped bridge the gap between Dancehall and hip-hop while also creating opportunities for younger Dancehall acts to make names for themselves overseas.

The single propelled Lady Saw to unprecedented heights as it landed the ‘Queen of Dancehall’ a Grammy Award for Best Pop Performance by a Duo or Group with Vocals in 2004.

2. Beenie Man and Mya – Girls Dem Sugar: Though Bounty Killer may have had first dibs on a successful collaboration with international artistes, it was Beenie Man who scored the bigger hit with an overseas act. In 1999, the ‘King of Dancehall’ combined with then upcoming producer Pharrell Williams and R&B sensation, Mya for Girls Dem Sugar, a song inspired by Beenie’s chart-topping single, Who Am I. With Mya offering a soothing set of vocals,Girls Dem Sugar reached number the top 50 of the U.S. Hip-Hop/R&Bcharts as well as number 13 on the UK Singles Charts.

Well received in local circles, Beenie Man ensured that Dancehall would finally garner the respect and accolades it so richly deserved and paved the way for artistes to follow his path to international stardom in the 2000s.

1.Beyoncé and Sean Paul – Baby Boy: Perhaps the artiste who took the most advantage of Dancehall’s rapid growth overseas was Sean Paul. Enjoying his most successful run of form yet with chart topping singles such as Get Busy and Gimme the Light, Sean Paul forever asserted himself as an elite artiste when he joined forces with former Destiny’s Child lead singer, Beyoncé Knowles for the single, Baby Boy.

A sumptuous single with Arabic music influences and a Reggae-like theme, Baby Boy shot straight to number one on the Billboard Charts and stayed there for nine straight weeks. Though it launched Beyoncé’s solo career, it’s undeniable that Sean Paul’s Jamaican flavor and lyrical touchmade Baby Boy a classic and as a result, helped his album Dutty Rock to win the Best Reggae Album Grammy Award in 2004. Since then, Sean Paul has arguably become the biggest Jamaican musical fixture overseas, joining forces with artistes such as Rihanna (Break It Off), Busta Rhymes (Make It Clap) and Alexis Jordan (Got 2 Luv U) amongst many others. Though many fans locally have criticized Sean Paul’s style of music, it’s unquestioned that he’s a major factor in why Dancehall/Reggae has become so popular worldwide.